More Than a Century in Practice

The law firm now known as Baty Otto Coronado Scheer PC was founded in 1921 as Mosman, Rogers & Buzard. In the mid-1980s, the firm, then named Field, Gentry, Benjamin and Robertson, P.C., was led by the legendary Lyman Field and Reed Gentry, among others. As these respected partners passed, and Kansas City and the world moved into the 21st century, the firm became Baty, Holm & Numrich, P.C., led by managing shareholder and president Lee Baty, a veteran civil litigator with the firm since 1982. A decade later, in 2011, the firm changed its name to Baty, Holm, Numrich & Otto, P.C., incorporating for the first time in the firm’s history, the name of a female partner on its door. Theresa Otto joined the firm in 1993 and today is its vice president. In the fall of 2019, the firm marked the arrival of partners and staff from Coronado Katz LLC and in January 2021, partners and staff from Schlee & McCarthy, P.C. In January 2022, partners Randy Scheer and Jacob Sappington and staff joined the firm in Springfield, Missouri. For more than 100 years the firm’s core practice has been civil litigation, at the trial and appellate levels in federal and state courts nationwide.

Since the firm’s founding, its members have practiced under a basic philosophy that each client is unique and deserving of personal attention and service. They have practiced in a variety of substantive areas, ranging from general corporate law to personal injury and across various industries including construction, transportation, manufacturing, utilities, professional services, retail, and government.

In recognition of their litigation proficiency, the firm’s principals have been elected as fellows and members of prestigious organizations. They have been fellows of the American College of Trial Lawyers, Litigation Counsel of America, and International Society of Barristers, and members of the American Board of Trial Advocates and International Association of Defense Counsel. Lyman Field and Reed Gentry were each named continuously in the litigation section of The Best Lawyers in America© from its initial edition. Lee Baty and Randy Scheer have also been recognized by this organization.

Over the years, various members of the firm have provided substantial public service, having served on the City Council of Kansas City, Missouri; the Kansas City Board of Police Commissioners; and in the U.S. Congress. C. Jasper Bell, an early member of the firm, served 14 years in the U.S. House of Representatives. Co-founder Paul A. Buzard served as a circuit judge, and former partner David W. Hauber serves as a district court judge in Johnson County, Kansas. Theresa Otto chaired Kansas City’s Board of Zoning Adjustment for 25 years, from 1997 to 2022.

Baty Otto Coronado Scheer lawyers also have made significant contributions to their profession.

From 1955 to its move to the Country Club Plaza in 1994, the firm’s office was in a building in downtown Kansas City designed and constructed to meet the specifications of the law firm at the time. The firm opened offices in St. Louis and Springfield in 1999 and 2000, respectively. During Lyman Field’s tenure with the firm, the firm’s walls were adorned with original works by his close friend, famed Missouri artist Thomas Hart Benton. This legacy is kept alive today through a handsome framed print of Benton’s “Trial by Jury” which hangs proudly in the firm’s main conference room with a view to downtown Kansas City. Lyman Field was Benton’s model for the lawyer addressing the jury in “Trial by Jury.” 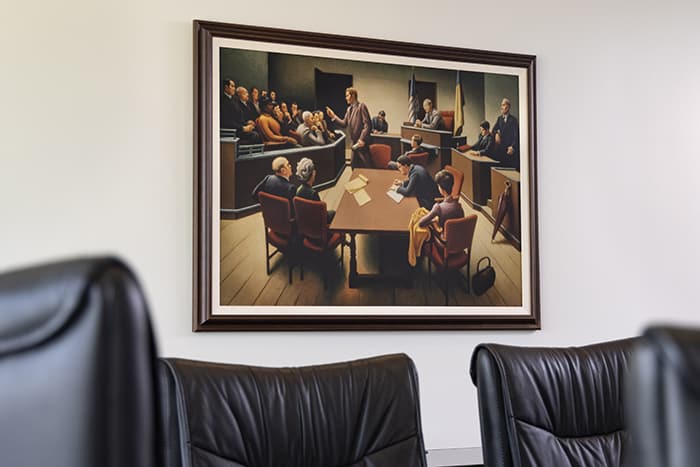